In my last post, I mentioned The Darkest Timeline. It's now ready to use, and the code is available at my usual repository, https://github.com/Chysn/O_C_Tutorial1


I've got some near-future plans for O_C, which I'll get into in a later post; but for now I'm formulating a design philosophy, and The Darkest Timeline is a test case for some of these principles. You won't see, from me, apps that look or feel like Ornaments and Crime's native apps. Some of my principles are as follows:
The Darkest Timeline follows these principles pretty well, and it's a lot of fun to play. It has two features that I'm particularly proud of.

The first is an adjustable index point. The "index point" is basically the start of the sequence. Regardless of the sequence length, the index point may be scrubbed through from the panel or via CV. This lets you warp a set of steps in a lot of different ways.

The second feature is the concept of alternate timeline output. Output B and output D provide alternate versions of the CV and trigger probability, respectively. Output B plays the sequence directly AFTER the one played by output A. That is, if the sequence is 8 steps, output A plays steps 0-8, and output B plays steps 9-16 (assuming an index point of 0). Output D is a probability-based trigger like output C, except it uses the step's complementary probability. That is, if the step has a 70% chance of firing the trigger from output C, there's a 30% chance of output D's trigger firing. These probabilities are independent, so it's possible for C and D to both fire (or not fire) on the same step.

All right, feel free to leave a comment if you have any questions. I hope that some of you grow a goatee and enjoy the alternate timelines.... 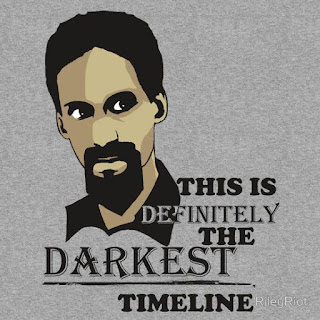 "If pitches were horses, we'd all be eatin' steak." --Jayne Cobb And where have I been for almost two months? I was busy...